Last week we had a real surprise with the Wedding at Luna Beach Club Benalmadena, but as always the staff’s work outshone what had happened.

The day started off as any other, Cathy & Tony’s Wedding was a Church Ceremony with over 90 guests. After the ceremony guests were then transported back to Sunset Beach Club by coach and taxis. Whilst on the coach we were required to give way to both a fire engine and police car, which the driver and I commented on how rare it was to see them, but thought nothing more of it.

The drinks reception and canapes were being held at Salitos bar, so on arrival to the hotel, the guests were then directed through the hotel down to Salitos to enjoy an hour of relaxation with some photographs by the sea.

The Wedding reception last Thursday was to be held at Luna Beach Club, which as it’s open to the public for lunch, set up is always done during the afternoon, meaning as the Wedding Planner I needed to head down to the venue during the drinks reception to arrange the decorations and last minute touches after the staff had completed the table set up.

Well as I walked down to Luna Beach Club, what I saw next was a real surprise!

Blocking the footpath was a fire engine and police car, as my phone rang and the Operations Manager’s number flashed, I suddenly started to worry…

On arriving to the venue, I found the upper deck dressed beautifully, and ready for the Wedding, while the lower deck had been cleared and was being hosed down from above, with a firefighter high on the mountain behind!

What had happened was that while the BBQ was being checked before cooking the food, a piece of debris had flown off on to the rocks above, and then blown back down on to the thatched roof, which had then caught fire! Thankfully, by the time I arrived, the fire was out, and the hosing was being done solely as a pre-caution.

Understandably, the staff were in a state of shock with what had happened, and of course with the clearing of the bottom deck, we were now looking to be running with quite a delay. The Operations Manager Miguel, arranged for an extra half an hour of drinks reception for the Wedding guests while the situation was resolved and the venue prepared. The guests were now looking to arrive to the venue at 8pm, rather than 7:30pm, but with the half hour extra of free drinks were not too upset by the delay.

As I’ve headed back to the drinks reception to make sure the couple are not too alarmed, at 7:30pm my phone rang again, this time it was Annemie, the manager of Luna Beach. She was calling me to tell me that they were minutes away from being ready to go! So I gave them 5 minutes to catch their breath before ushering the Wedding party down to the beach club. Surprising, we had the guests in, and eating their meal by 7:50pm, and by the time the meal and speeches were over, the disco started on the dot of the scheduled 10pm!

I don’t know how they did it, but after all of the stress and upset of the day, the team worked with seamless perfection from start to finish. The staff at this venue are truly outstanding! 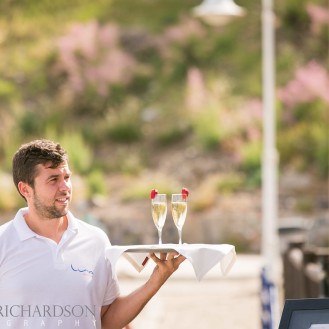